So let’s start at the front of the house shall we? I said I’d share our before and afters, so let’s get the guest bathroom out of the way first. Not because it’s not interesting, but because our renovations in the other rooms are much more captivating. 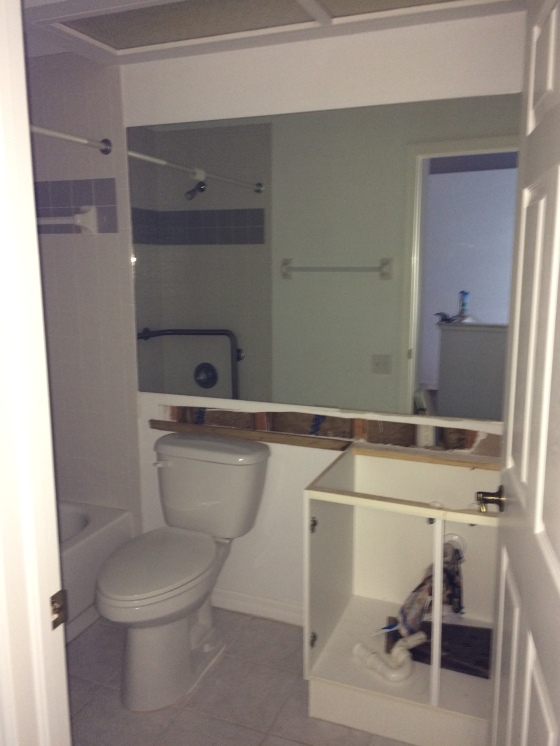 We removed everything except the toilet, which got a gooooood scrubbing. 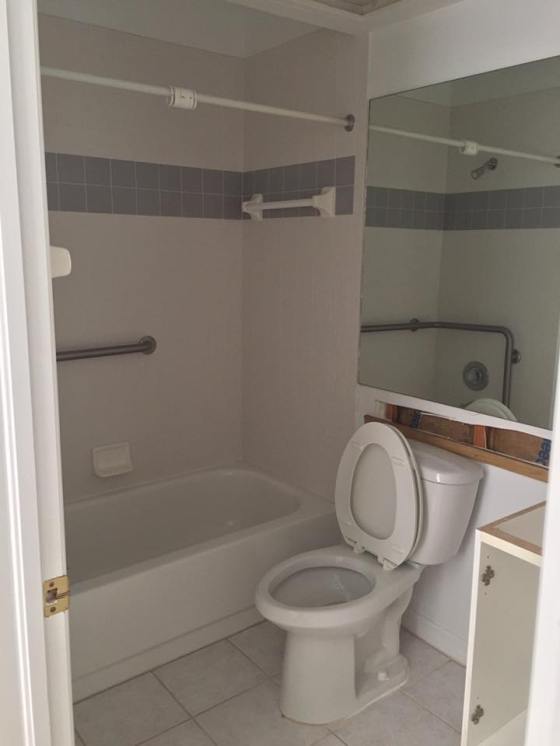 Ok so I obviously started demolishing this room before we got any real true before pictures. My bad. I have little patience and since I’m not getting paid to blog, I don’t remember these things until it’s too late.

But as you can tell it was ugly. We had already removed it before this picture was taken, but there was a sink/countertop that extended over the toilet uselessly because there was barely any space to put anything on the counter over the toilet. You can see in the first picture there was this drop-down soffit fluorescent light fixture that was heinous. It seriously took up like 2.5 feet of the ceiling height (there was also one in the master, unfortunately). Then there were those 4×4 in. square tiles in the shower with a really shallow tub. The laminated particle board for the sink cabinet, and no real place for storage. The handicap railing in the shower. The one long builder mirror and hideous square floor tiles that looked like the color beige threw up everywhere (including our kitchen, master bathroom, and stairs).

In short, this bathroom was nasty.

I had a Pinterest board going with our designer, Meg Brannigan of ME Style Designs. We decided on items that had a lot of function but had classic yet updated looks, enough so that when it comes time for us to sell our house, the retirees/snowbirds who love this area will love the design enough to consider this house turn-key. Always gotta think ahead.

First we tore it down to the studs, which is much harder than it sounds. 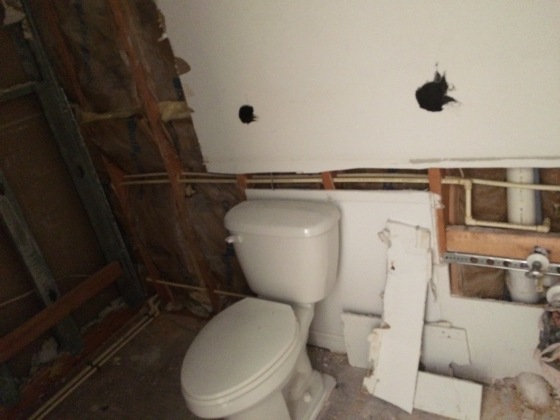 Parts of the wall where we were trying to take just the tile down off the shower crumbled underneath, so even though we weren’t trying to take it down to the studs, we really didn’t have another option. Also, the tile jackhammer (even the small one) is so incredibly heavy; make sure you have a protein shake on hand or something to keep your energy level up!

I left the tile removal in general up to Timmy. It was just too difficult for me to operate either the small or big jack because of their weight and the angle that I had to stand which killed my back. A big shout-out to Timmy on these jobs!

Once everything was exposed, we realized we had a major issue with our plumbing. Our type of plumbing was considered illegal (but not at the time it was put in the house). We could choose to leave it and then have a major issue once the walls were closed up somewhere down the line and ruin all our renovations or just replace all the plumbing up front. It was an expense we hadn’t budgeted for, but considering how much more we were risking going forward with the old (and the fact that the plumbing hadn’t been used in years at this place), we bit the bullet and replaced everything.

Which set us even further back when the rough plumbing was inspected and approved but the final wasn’t. So odd how inspectors work.

We also had a major paint issue crop up that was the basis of many many arguments Timmy and I had during this process. At the beginning of the design stage, Meg and I met to discuss colors and such. She had the biggest color swatch collection I have ever seen and told me to go through it and select colors I liked. I think I chose like 46 colors.

I tend to go for big sections of neutrals and pops of colors everywhere. However, I was so overwhelmed with everything else going on that I told her to go ahead and select the colors for the bathrooms. She decided on a bright yellow for the guest and a bright teal for the master. Neither of these options bothered me massively, but since paint can be difficult to envision unless it’s all up, I went ahead and painted both rooms so Timmy could get the whole look.

Timmy was not happy. And Timmy thought I had decided paint colors without him, which made him angrier.

Needless to say, this was not the only stupid, worthless argument we got into during this past year. But it was definitely a sticking point. So back we went to the drawing board and Meg selected a much more neutral, gray/beige color.

We repainted, and are very happy with the color now. So let us never discuss the process of selecting the color again!

Another issue I had was with the original tub. I love baths. I know, some people think they’re super wasteful but they are me-time. They help my back pain and duh, they’re great for pure relaxation. The problem is everywhere I’ve lived, I can only get EITHER my boobs OR my knees underwater. It’s been a life mission to get what I call a “knees-and-boobs” tub; this way, all of myself is underwater at the same time. Ladies, I know you feel me.

The rest of the design choices came easily. I love a clean white subway tile with dark grout. Timmy wanted a wood-grain tile for the floor. And boom we got it all. 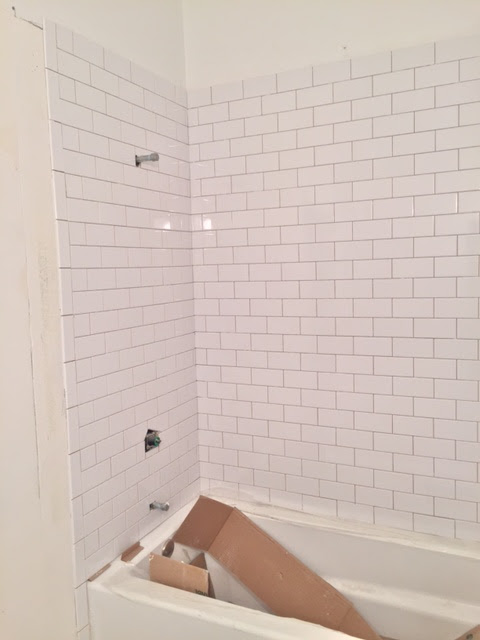 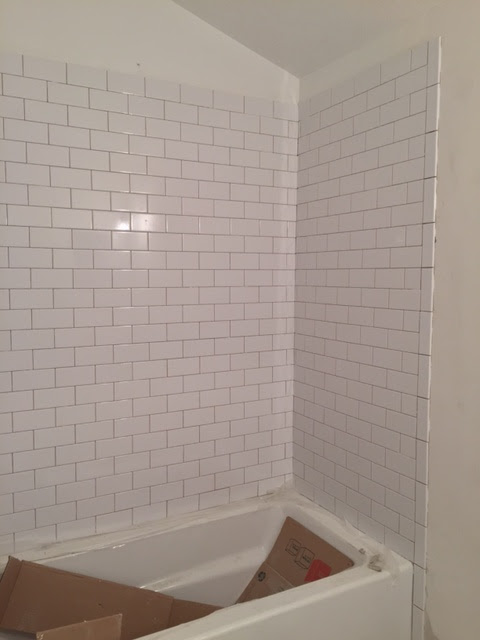 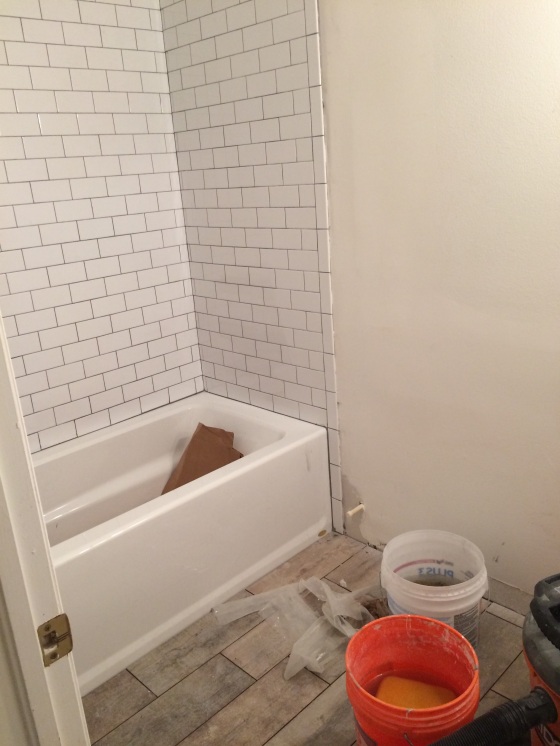 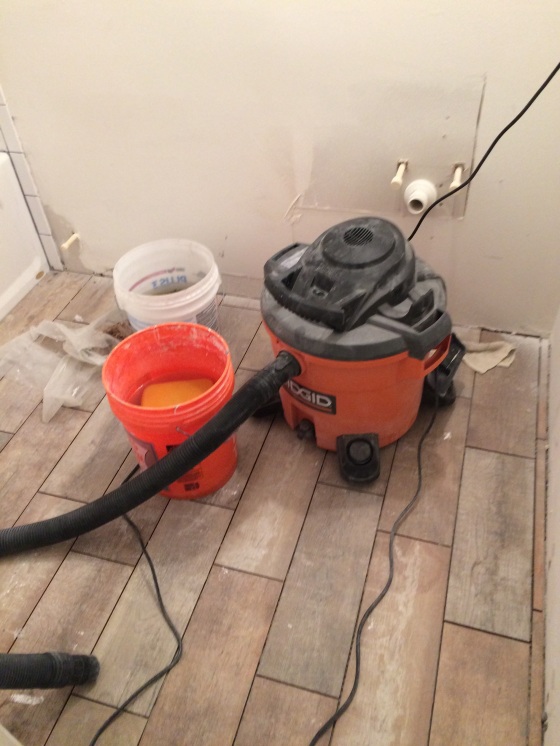 laying down the floor 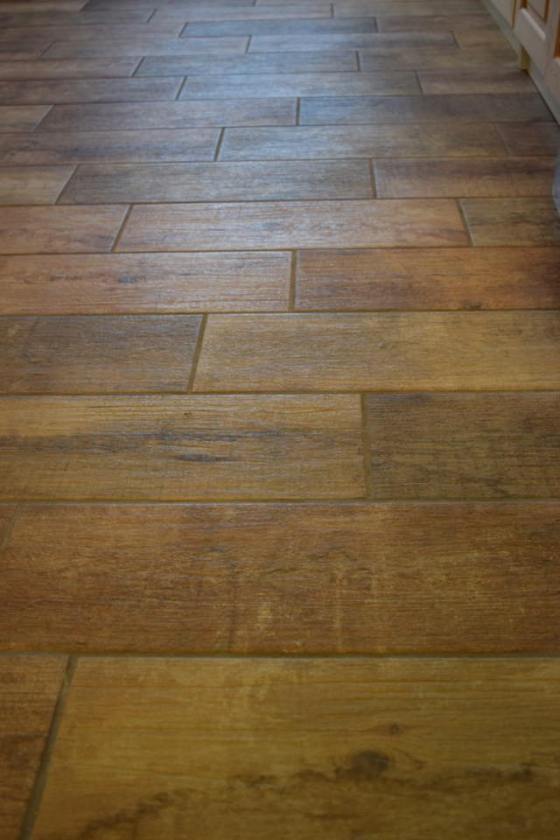 The floor tile is the same now in the 2 bathrooms and kitchen. Eventually we will redo our stairs to match this tile, but since it wasn’t a priority, we’ll do it sometime in the future.

Tiling the shower and floors were originally on our DIY list. It looks hella easy on HGTV, right? But after looking at the finished product and the fact that our contractors only took 3 days to complete the showers and floors, we’ve since thanked our lucky stars we didn’t try to take this on. One, it would’ve taken us 10x as long to do it correctly, and look at the lines here! We would’ve sucked at it, let’s just be honest with ourselves.

We selected all our vanities from Ikea because the prices just couldn’t be beat. We selected based on cost, style, and ability to appeal to other buyers. Timmy and I built all of the vanity pieces and our contractors installed them. We chose this one for the guest.

We did run into a little issue with the sink drain from the Ikea countertop/sink in that it was chrome but our other fixtures were going to be brushed nickel. Since the guest bathroom is much smaller than the master, it was going to be obvious the differences in finishes since you could see them all quickly. So we switched to all chrome in the guest, yet in our master, the sink fixture finishes are chrome, and the shower fixtures are brushed nickel.

Again, another design element that no one thinks of! I would’ve never thought about that in a million years, so thanks to our contractors for noticing this!

Our designer created some of the other pieces and found similar ones to complete the industrial/vintage/contemporary look, like our light fixture, towel bar, and toilet paper holder. All in all, the look is very us but I think could appeal to anyone else as well.

So without further ado, here’s the finished look! 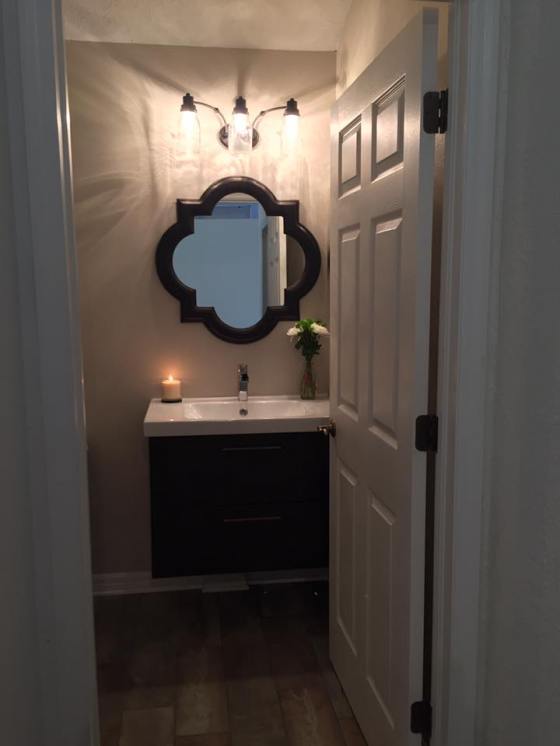 the view from the stairs 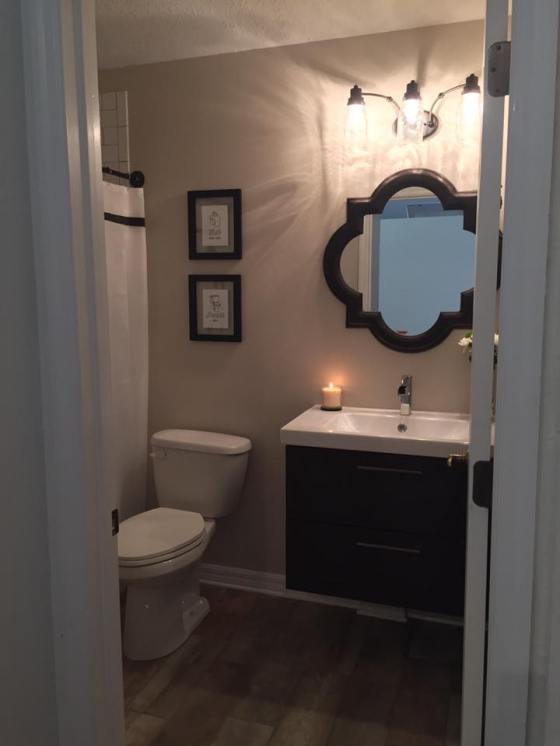 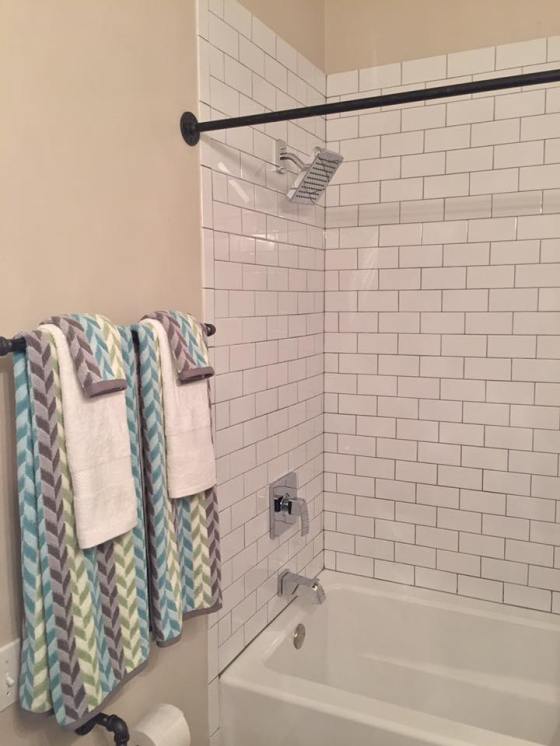 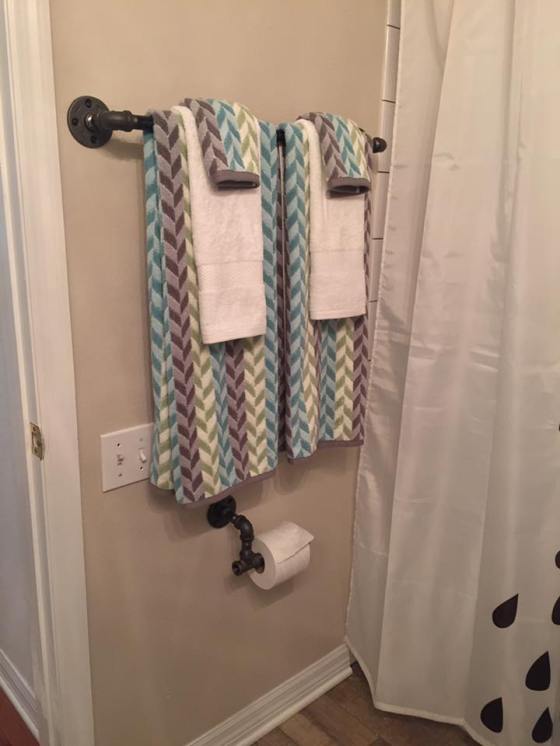 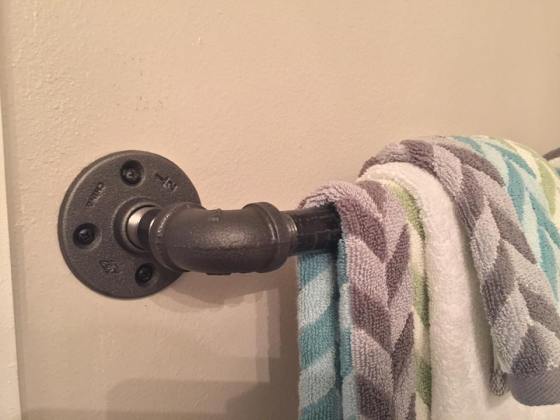 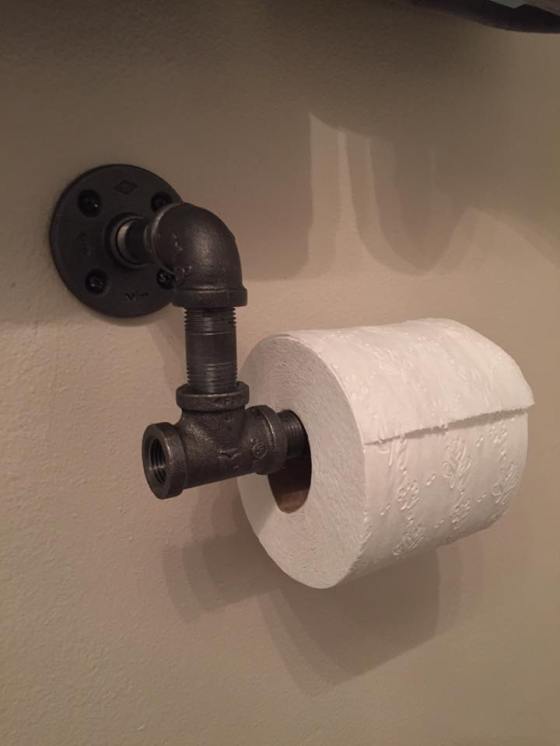 Timmy and I have said, since our first place together, that the secret to keeping our relationship afloat is having 2 bathrooms. Looking back, maybe sharing 1 bathroom in my apartment all last year is really what made our lives so difficult all that time.

We love our bathrooms, in particular the mirror and light fixture in this one. It’s so unique and bright, but still feels so homey at the same time. It’s functional (knees and boobs!) yet feels like a hotel bathroom with some of the touches, like the waterfall  faucet and showerhead.

A little PSA, if you can, hire a designer. We couldn’t have survived renovating this house without Meg. She led the way, did more couples counseling than she probably bargained for, and made all the difference.

Up next, the master bathroom!