I’m not a DIY-er. I’m impatient, not creative, nor do I want to look up 15,000 steps to create something I can easily buy on sale at TJ Maxx. Some people have the craft bug in them; I’m not one of those people.

But every so often (and by often I mean maaaaayyyyybe once every 12 years), I’ll find something that I know I can accomplish with few ingredients and steps. I’ll think to myself, “Now this is a craft someone like myself can do and not f*^k up too badly.” Bonus points for crafts that look like you were trying to slightly f*^k it up anyway.

I can paint the hell out of things, and I like to think I’m pretty handy around the house. Like my desk-turned-into-tv-stand-and-storage, I can definitely do things that don’t require much other than paint, brush, and stapler (I mean desk stapler, not a fancy schmancy one). So why not try to do a craft that involves a painting-like approach?

I bought this map probably 6 years ago with the intention to get it framed so that it looked like an antique. Little did I know at the time that having to custom order a frame for 50″ x 32″ was somewhere in the million dollar range (I exaggerate, but yes, that’s what it feels like when you’re a grad student). And so it just sat. And sat. And sat some more.

We almost threw it out a bunch of times, but I held onto the idea that something could be done with it. Pinterest definitely served as an inspiration because I know I would’ve NEVER heard of Mod Podge anywhere else. So while I had the idea in my head of what I could do with it, I never quite had the motivation until a few weeks ago.

I decided to just say screw it, and let’s make this project a reality. The plan was to split the map into three sections, Mod Podge them onto the canvases, and make interesting yet super easy art. So off I went to Michael’s, armed with a 20% digital coupon, and bought 3 15″x 30″ canvases. Since I’m lazy as hell, I eyeballed the sections and cut, hoping for the best. Don’t do this if you really want perfection.

I took one section at a time because, duh, and Mod Podged the canvases first.

I’m sure there’s a WAY more precise method of doing this, but I’ve already established that this isn’t the perfect way to DIY a canvas map. I used foam brushes to distribute the glue all over the canvas and down the sides since the map was overhanging (which is what I wanted).

I laid the map down on the canvas and did my best to get out the air. You can see that I sucked at this step. In my defense, this map had been rolled in its container for YEARS, so getting it to lie flat at all was a huge success.

I repeated this process for the other two canvases, sucking equally at getting the air out of each. You can also see that I accidentally tore the Hawaiian Islands, but hey, they’re islands. At least I didn’t tear an entire country in half. 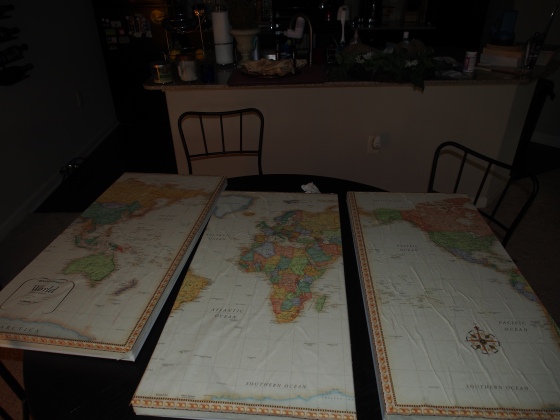 Once all 3 canvases were done, I waited the required time as directed on the Mod Podge bottle (I think it was 2 hours). Then I Mod Podged the top of each canvas with two coats, waiting 20 minutes in between each coat. I took down the entire bottle of Mod Podge with this project (and I’ve used the words Mod Podge more times in this post than I’ve ever said in my whole life). 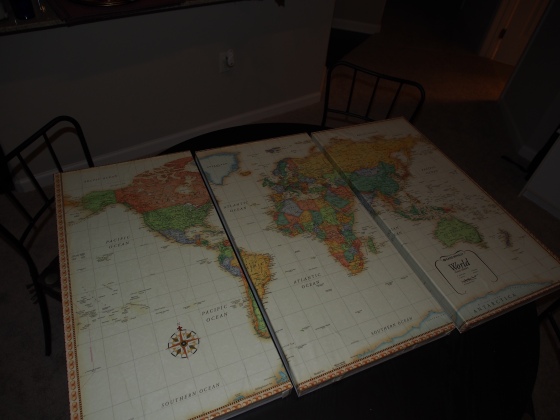 I let them cure for two days on my dining room table. Warning: be ready with a wet paper towel in case anything drips on the surface of whatever you’re using. Since I’m also not super precise, I kept brushing Mod Podge onto my table when trying to brush the canvas sides, and luckily was able to wipe it up immediately.

After curing, I hung them and was surprisingly impressed at my ability to not destroy the map. They kinda look vintage, look kinda artsy, and definitely look better than just framing the original map. I also eyeballed hanging them with spaces in between each canvas because I can’t be bothered with a ruler and level.

With the coupon, I spent around $65 on 3 canvases, the brushes, and the Mod Podge. Not bad for a non-DIY-er. Not bad.

First day back at work has me missing ALL the family time over the break. It pays to be in the present moment. #familyovereverything #familygoals
I don’t remember half of 2019, so all I can say is byeeeeeeeee. 2020, let’s do this WITHOUT any head injuries. 📸: @angelacliftonfl #nye