I’ve been wanting to write down our engagement story, to share with you our love and all that went into this momentous life decision, but I can’t. Not right now. It would be inappropriate to do so, even if becoming engaged is a big deal.

Could I tell our story to provide the world with a little humor and hope? Sure. But what’s happening in the world deserves to be recognized, not pushed aside or ignored like I’ve seen MANY of my friends doing so lately.

No, what I’m going to do here is tell my story. A story that has everything to do with the world today. A story that is the DEFINITION of racism and stereotypes and how people are born into this world with very clear advantages without ever having to work for them. A very clear, non-argumentative description of my life. How life as a Hispanic person in the United States has been amazing and without racism and judgment, and how I’ve been able to achieve every life dream and goal with no one but myself standing in the way.

This is my story of taking advantage of white privilege without being white.

I hope that sentence kind of stunned you. Because it’s absolutely, 100% true. I’ve gotten to where I am in life (obviously with the help, care, and financial support from my family) partly because I look white to the world. I have lived white privilege and can capitalize on a world where white people are completely blind to the privilege they inherently own the day they are born.

My life’s experiences have been shaped by the world’s perception of me as a white person. I don’t look Hispanic. I’ve actually argued with people who said I couldn’t be Hispanic and had to challenge their prejudices. I don’t have long black hair that’s kind of curly. I’m not dark year round (although I do have a rocking tan now that I live in FL). I don’t have an accent. I’m curvy-ish, but out of the two of us, Timmy clearly has the Latina ass. I don’t wear large hoop earrings with my name in the middle, I don’t speak in Spanglish, and I hate spicy food and cilantro.

Usually, when I point out my ethnic background, people will say they had a feeling because of my insert stereotypical ethnic/racial body part. And even then, they still don’t realize how completely prejudicial and racist it is to say that.

My entire life I’ve struggled to understand the mixed culture that I come from, both Spanish and Panamanian. I wanted to understand what made me different, at first because I hated not being blonde and blue-eyed and Southern, later to celebrate it, to revel in it, to appreciate it. I think because my parents came to this country for us to ensure that we had a incredible, comfortable, free life, they tried to steer me away from identifying as anything other than a white American. Was that bad of them? I don’t think so because I know they recognized the overwhelming advantage of looking white in America without ever having the words to describe how they knew this.

I’ve lived a truly, in every sense of the word, privileged life.

I straddle a very amazing racial and ethnic line that I’ve loved my whole life. Minorities of any and every kind have been able to spot that I’m not really “a white person.” I’ve hung out with nearly every ethnic, racial, gender, sexuality, and cultural identity there is on earth because I look white without being white. I can dance well, I am athletic without being clumsy, I do well in academics, I can speak slang without being awkward, I know about current pop culture trends and fashion, and I love me some So So Def Bass All Stars. I can capitalize on the world’s opportunities without being offensive or intimidating to minorities.

[Actually, I haven’t hung out with many Native Americans because let’s face it, we like to act like they don’t exist because this country tried to exterminate them. They, without a doubt, have had it worse than any other group ever. That’s fact.]

The only l thing about who I am that has negatively impacted my ability to walk down the street without being bothered by what others see is my female-ness. I can’t walk down the sidewalk, grocery store, Target, parking lot without getting yelled at to smile, show some leg, be happy, told I’m pretty, nice boobs, etc. I can’t even remember a time when this didn’t happen on a daily basis. Being female has really been the only thing that outwardly, I can’t control how the world perceives and treats me.

But, because I am a WHITE-looking female, the world treats me better than any Hispanic, Asian, Black, Indian woman has ever been treated. I look like I deserve to be where I am, as opposed to other women, who have to prove they can speak English to be intelligent, who have to show off their boobs and ass to be deemed attractive, who have to look or sound or act in an extremely specific way in order to just exist.

In this world, I’ve been given the freedom to joke about black people always being late and Hispanic people loving the meringue and Asian people being good at math and how women should make sandwiches and how lesbians move in together after 2 dates, and not be hated for doing so because I belong to a minority and actually know the reality of life in this country as a minority. I may not have lived it personally, but by the mere fact of belonging to an “other” group, I am inherently empathetic and have been given windows into all of these wonderfully colorful and profoundly proud cultures and identities.

And white people love my racial ambiguity because they can be super racist and prejudicial with me under the guise of jokes and have no clue of the privilege they live every second of every day because I’m white enough to not make them feel guilty.

I’ve seen it all. I can tell you without a doubt in my body that white privilege is real because as a non-white person, I’ve used it to my advantage.

I’m only speaking my truth. It is completely sad that from the get go, opportunities existed for me because of my color that wouldn’t have if I had been born with darker skin. I’m saddened by the state of our society and how these things are still allowable. But I certainly didn’t create it and I hope and pray that I’m not perpetuating it.

You can’t say or act like something doesn’t exist and then live your life based on those exact principles. Silence means you accept things as they are, and I’m sorry, but my white friends who have stayed silent, who have talked about beach trips and house showings and your Christmas trees, I believe that you accept this world AS IS, the same world that has given you the chance to take beach trips, to show houses TO BUY OR SELL, to have room to own a Christmas tree in the first place.

In the grand scheme of things, buying this year’s tree, or going to the beach, or going to the bar aren’t really that important. I’m not saying they shouldn’t be personally important to you. Of course they are, they are a part of your life. What I’m saying is we have to accept that there are forces allowing us to have these types of moments in the first place that have nothing to do with how hard you work or how much your parents helped you.

Be aware of why you are where you are in life. It wasn’t just because you had bootstraps that got pulled up, or because you didn’t need a handout, or because your mom and day worked super hard to help you gain a solid foundation. It was because this world, the way it is now, has ALLOWED it. The world didn’t stop you inside a Walgreens while you were looking for shampoo, it didn’t arrest you for looking like a criminal, it didn’t pull you over because you seemed like you were doing something illegal, it didn’t treat you like crap at a restaurant because it figured you were going to tip poorly.

The truth is simple and irrefutable: black people go to jail more than white people for the same crimes, they are kicked out of school more than white kids for the same concerns, they live a life knowing that they cannot control how the police, teachers, and business owners treat them because they cannot change being black. I will never have to worry about wearing a hoodie or taking my time in a store or how walking with a group of people who look like me will affect my right to feel like a human being.

I’m not a terrible person for taking advantage of looking white. I only recently realized how looking white shaped my entire life and future, without me even knowing it.

You are not bad people if white privilege worked for you. You came into this world with advantages that you had no say over whether you got them or not. You worked the system without even realizing the system was working FOR you.

But the time of being silent is over. The time of not appreciating why your life truly looks the way it does is done. Yes, mom and dad and your persistence and motivation got you somewhere. But if you looked any other color than white, that “somewhere” would never have been available for you in the first place, or at least it could have been with many more hurdles in between you and it.

To my friends who have no more words, no more tears, who have frustrations, and are angry and helpless, I am with you. I will do my part to change the world, in my own way, on my own path. I will continue to check those who don’t appreciate their privilege, who don’t understand prejudice at its core because they “have a black/gay/asian/etc. friend”, who refuse to see that the world is still very black and white, no pun intended. I will drop knowledge wherever I can and leave people with the words of Biggie Smalls, “If you don’t know, now you know.”

I will be silent no more. 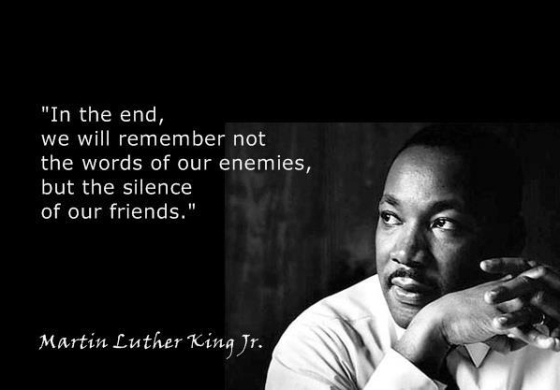