I feel like sometimes I nail it, right on the head, that sweet spot known as a perfect compromise. The decision that gets both parties what they want satisfactorily without anyone feeling like major sacrifices took place. Other times, I feel like the only way to feel like justice is being served is to duke it out Hunger Games-style until one person is dead and the other left standing victorious and therefore able to make whatever the hell decision he/she wants to make. Is this just me?

The more time that passes in our relationship, the less I can tell if we’re getting better or worse at compromising. It doesn’t matter if it’s a small or little thing. Most of the time, compromising feels like one of us is just giving up in order to move forward without a fight. Is that what compromise is in the end? Between two people who have chosen to spend their lives together, compromise = giving up? Should I be disappointed in this? 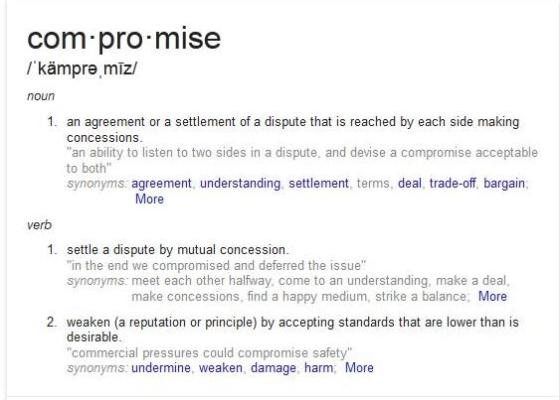 quick search of google gives you this definition of compromise

There are probably about a million things that Timmy and I agree on. But for those million things we agree on, there’s half we really don’t see eye to eye. Half of that stuff is non-important stuff that we can agree to compromise on, staying in that sweet spot zone. A quarter of non-agreeing stuff, I don’t think either one of us really cares about at all, so we agree to let the other person just have their way. But that last 1/4 of the stuff….holy shit, that’s the stuff that makes you stay awake at night, the stuff that you will destroy furniture and glassware for (not that I’ve done this), the items that you don’t think Satan or God could get you to change your thinking on.

Most of the stuff that Timmy and I agree on are those important life things, like core values, moral fiber, education, and relative equal standing in life. Those things have always been what I believe makes or breaks a relationship. If you can’t agree to the values that you hold dear in your own life, you have no chance of making it. I’ve experienced it before in past relationships and see loved ones’ relationships crumble all the time because the foundation they thought they had in common was built out of totally different and incompatible materials.

The stuff we don’t agree on, the items we would punch each other in the face over (if it were legal and not harmful), that’s the stuff I constantly struggle with deciding on how to compromise.

Take for example being punctual. In my family, we are HYSTERICAL about being places on time. This is not a joke. Many many many a fight has been launched because someone made the entire group late. It doesn’t even matter what we’re doing or where we’re going; it matters if we’re on time or not. I will admit that being punctual is probably one of the only things that gives me legit anxiety. And it’s a tangible anxiety that anyone can see starts to get worse and worse as the minutes tick by.

Timmy, on the other hand, I wonder if he can even tell time. I don’t say this to be a bitch, but to illustrate his inability to manage time. He is habitually at least 15 minutes late to everything, and when we have to go somewhere, that time has extended to two hours more than once. MULTIPLE HOURS LATE. Why…what…I mean, how is this even possible?!?!

When I get ready, I’m able to accurately estimate how long it takes me per item on my checklist: do hair (15 minutes), makeup (5 minutes), find outfit (5-10 minutes), pack (20-30 minutes), etc. It’s the planner in me. I know myself well enough to call it like I see it: I’m not spontaneous, I’m not chill, I’m not “fly by the seat of your pants”. I’m the complete opposite of all of that, and I love that about myself. I’ve been this way since I could form thoughts. I believe it really is a part of who I am and how I present myself to people. What I believe my planning and punctuality say about me is this: “Victoria is punctual and reliable. She wants me to trust that she will be places on time, be where she says she will be, that she is honest and trustworthy.”

I can’t even honestly tell you how Timmy approaches time management. I’ve never seen anything in my experience that suggests that he has a plan or is able to accurately estimate how long it takes him to do things. Most of the time, his time projections are off by about 20 minutes. From my viewpoint, he spends a lot of his time moving slowly, checking FB and his phones, stopping by the tv to watch ESPN, then moves on to do things on his checklist. We’ve been late to weddings, festivals, parties, vacations, and dinners because of his time management skills. And it kills me slowly every single time. All I had to do was read this article today in the Huffington Post to get anxious all over again about being late to things!

I know everyone is different and handles things differently. To each, his/her own, right? In most cases, I agree with this statement. I don’t want to ask someone to change something about themselves that is character-defining or is one of those core value items I discussed before. That would be ridiculous and just wrong.

But herein lies my problem: DO I GIVE IN OR FIGHT TILL I DIE ABOUT PUNCTUALITY??? His inability to move his arse into a similar gear that mine is in drives me crazy. Certifiably crazy. Should I just accept that this is how he is, and try to control the anger and rage that rise in my throat every time it happens? Or do I insist that he try to practice time management skills like alarm-setting, to do lists, reminders, itinerary planning, because it’s a necessary skill to have in life? Shouldn’t the mere fact that it drives his girlfriend insane be enough?

How do you compromise on something that you feel is important, with every bone in your body, but isn’t on the same list of priorities for your partner? I attempt to control my anxiety so that my reaction isn’t negative and strong. But in order for me to feel like it’s a true compromise, shouldn’t he also have to rise to the occasion?

Is this a typical male vs. female argument? That women are better planners and men just need to be told where and what to do in order to keep a relationship afloat? I for one refuse to buy into that gender norms crap. I think everyone has the ability to control their emotions (like how I try to) and improve their skills (like I think Timmy should). But it can’t happen without practice.

Before you think that I’m an exploding crazyass girlfriend, I will share with you that I know for a fact there are things I do that drive Timmy crazyface, and I have maybe not attempted to fix because I don’t see what the big deal is. Or maybe I like that thing about me that he can’t stand. Do either of our complaints or seeming apathy make us bad people not meant to be in a relationship with each other? Absolutely not. It makes us two different people trying to make a relationship work.

Either way, we’re not perfect beings without flaws. We will drive each other nuts sometimes, and that’s life.

If we can all agree that it sucks sometimes to compromise, I think we’ll be ok. It works out in the end, and you just keep practicing and trying and working at it. I keep practicing at controlling myself, taking a breath, reminding myself that it’s not the end of the world if things don’t always go my way. It’s a part of being in a relationship, any kind of relationship, that oh-so-fun game of give and take.

But give me my watch, cause seriously, that shit drives me crazy.

3 thoughts on “How to Compromise”